These are my drawings of The Priestess on the left and The Emperor on the right, of the Tarot deck of cards.

I Interpreted the Priestess as being spiritual, or intuitive, therefore she covers her eyes to see with her heart or her mind. The planets revolve around her, and the moon. This is to show she is not of the earthly realm.

A star governs her throat, which means she speaks from far away places.

The Emperor is depicted as a man of power, or a magician, who is called to action. Now is the time for aggressive action.

He is depicted on a throne with two sphinxes at his feet, the sphinxes represent a riddle or mystery and power is a riddle. 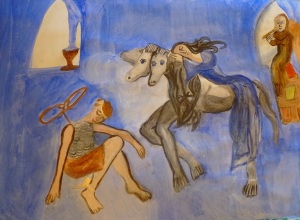 An angel mysteriously plays the flute, luring one to the afterlife.

The God Hermes is kneeling before the trinity. Bringing a message perhaps. It is the realm of otherworldly beings communicating to each other.

In card interpretation, it is saying that one should use their three levels of perception, physical sight, mental sight and spiritual sight. Also that a message may be arriving.